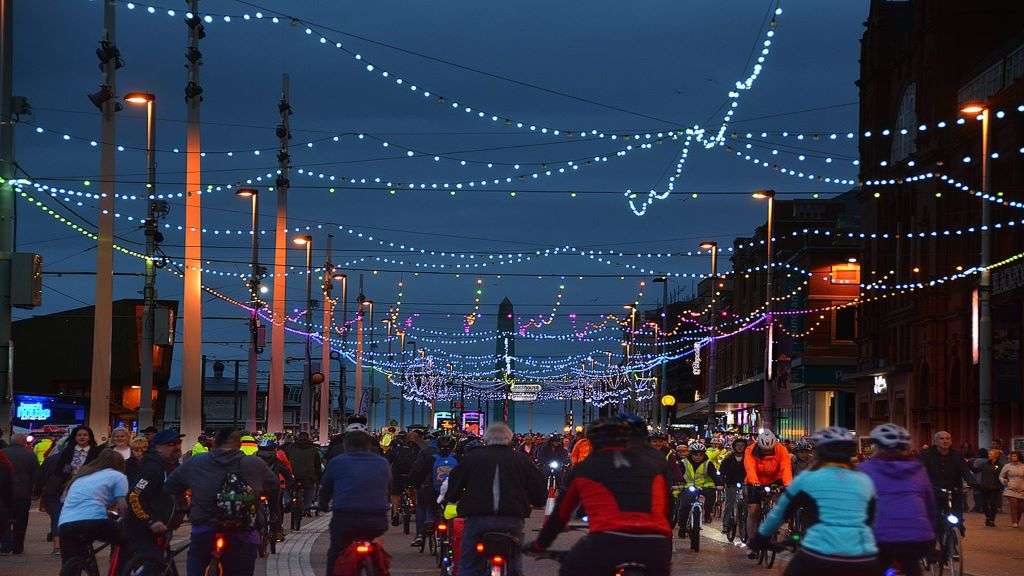 This year Ride the Lights, Blackpool Illuminations Preview, is on Tuesday 30th August 2022.

Cyclists, many in fancy dress, will descend on Blackpool Golden Mile from Starr Gate, South Shore and Red Bank Road, Bispham you can join and leave at any point along the route. Around ten thousand cyclists are expected to a massive fun party cycle ride.

Many cyclists will adorn their bicycles with a their own version of Blackpool Illuminations get your flashing lights on and get out there.

All bikes must be road legal, a working white light on the front, a working red light at the rear. Children should be accompanied by a responsible adult and cycle helmets are recommended.

The event has marshal’s, first aid assistance, bicycle mechanics and support vehicles along the route should you require any assistance. Remember the trams will be running so keep clear of the tracks.

Ride the lights event is not a bike race, it’s a fun and FREE bike ride open to all. A great opportunity to get out and about in Blackpool on your bicycle with family and friends.

The fun starts at 7pm and runs untill 10pm. Have a great evening out with all the family I look forward to seeing you there.

Entertainment will be at the Ride The Lights hub at Tower Festival Headland where Radio Wave DJs will keep the party going.

As I mentioned previously the Blackpool Trams are running and those whose cycling days are behind them can get a free preview of the illuminations from the vantage point of the new trams.

No comments to show.
Go to mobile version